Just after 11 pm Friday night, the “full company” was dispatched to assist the Strasburg Fire Company #1 on a barn fire in the 900 block of Eisenberger Road in Strasburg Township. Multiple calls to 911 reported a large barn on fire. Truck 5 requested the 2nd alarm before arriving due to the large volume of fire visible in the area.
QFD units arrived and assisted in fire attack, water supply, tanker fill and traffic control. Truck 57 flowed the elevated master stream, Tanker 57 had the Water Supply Command, Engine 574 and Rescue 57 assisted on fire attack and drafted from a small pond near the scene, Engine 572 drafted and filled tankers on Weaver Road and Squad 572 and QFD Fire Police assisted with traffic control in the area.
Most QFD units were available by 3 am.
Thanks to Gap Fire Company Engine 42-1 and Delta-Cardiff Volunteer Fire Company Station 57 Tanker 57 for standing by and covering the area while all QFD units (Engine 574, 572, Truck, Tanker, Rescue, Squad 571 and 572) were out. Thanks also to Tom Amico for the pictures. 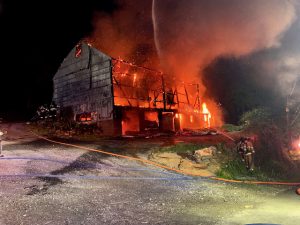 924 Eisenberger Road in Strasburg Township
This is the 2nd barn fire in less than 48 hours that QFD has operated at.