At 10 pm Thursday night, QFD and mutual aid were dispatched to the 200 block of Greystone Lane in Quarryville Borough for a house fire.  The 911 information was “an alarm sounding and an odor of smoke in the area”.

Engine 574 arrived and dropped a supply line from a hydrant on the block.  Tanker 57 picked up the line and set up on the hydrant.  Engine 4’s crew forced the door finding high heat and heavy smoke as the line was stretched.  Truck 57 threw ladders and the crew searched the residence.  Engine 572’s crew was the third-due Engine and set up RIT until the arrival of Rescue 50.

The fire was knocked down quickly, the searches were negative and overhaul and ventilation were started.  Chief 57 had command and Chief 571 had operations.

Units were on scene for about 1.5 hours.  Our thoughts are with the family involved.

Thanks to all the mutual aid co.panies that assisted, and to the QFD members that operated. 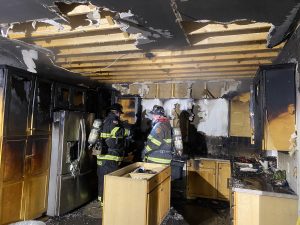