On Tuesday afternoon, Chief 572 was sent to Providence Township to investigate a cat in a tree. Truck 57 was later called for. On arrival, the angle of departure on the driveway was too steep for the Truck, and with the cat still 50′ up in the tree, Truck 57-2 was called for. Actually, it is our old 1981 Mack Aerialscope that was sold on 2003, and then bought back by two QFD members last year.

The “Scope” was able to access the driveway and set up, rescuing the previously mentioned cat.

Some of the members who helped were only in elementary school when the Scope was sold, so it was a fun trip back in time. 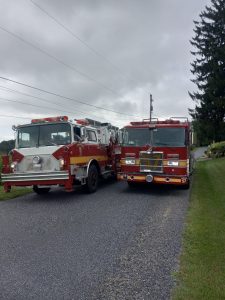